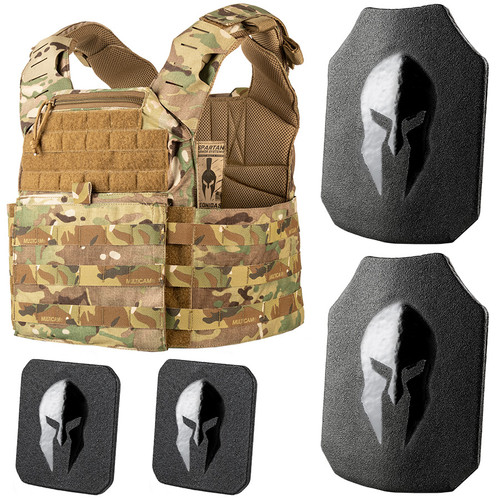 One Leonidas Plate Carrier
(Your choice of color)

*Note* This plate carrier by itself will only hold 5x15 Soft Armor Panels, this package will come with a molle system to attach on your 6x6 or 6x8 side plates.

The Leonidas plate carrier is an advanced plate carrier system is fit for a Spartan King, hence the name "Leonidas". This versatile plate carrier hosts a wide variety of proven features including a removable cummerbund. When you are looking for the toughest plate carrier available to take into battle this is it. Take a look at all the features below.

*Note* This plate carrier by itself will only hold 5x15 Soft Armor Panels, this package will come with a molle system to attach on your 6x6 or 6x8 side plates.

Our AR550 Level III+ armor has our GEN2 lower cut radius. With a 10% increase in core hardness, this ballistic grade steel perfectly hits the “sweet spot”. It’s much harder than AR500, but not too hard to cause severe stress while forming.

Our AR550 Spartan Body Armor now has the option of Advanced Triple Curve (ATC). An industry FIRST! Spartan Armor Systems™ is proud to be the FIRST in the industry to commercially offer triple-curved AR550 body armor. With higher velocity rifle threats commonly present throughout the United States, we’ve developed this AR550 armor to specifically defeat some common threats such as 5.56 x 45 XM193, 5.56 x 45 M855 /SS109 and 7.62 x 51 (.308 Winchester) at a rated velocity of 3,100 fps or less. Additionally, we’ve successfully defeated these threat profiles from Close Quarters Battle (CQB) distances…repeatedly!

Configuration:   This armor comes as a pair, meaning you will receive both front and back plates, and optional side plates

Full Coat or Base Coat Options:

We are excited to announce our potentially “life saving” breakthrough!  The strike face for our plates is mark embedded with our Spartan logo! Both sides of these plates are coated, however, the back side only has a “courtesy coat” to protect against wear and rust. The front of the plate is lined with 1/4-3/8 of our proprietary coating, Encapsaloc ™.  The result is a plate approximately 1/2-5/8” total thickness.  See our FAQ for more information about our Encapsaloc ™ process. By purchasing, you will receive (2) Formed Spartan™ Omega™ AR500 Body Armor 10″x12” chest plates.  Due to popular demand, we have added a “base coat” only option for our AR500 Omega™ armor products. The base coat option has an extremely thin layer of our fragmentation mitigation coating to aesthetically enhance the plates, and to provide corrosion resistance. This coating has minimal, if any, fragmentation mitigation capabilities. 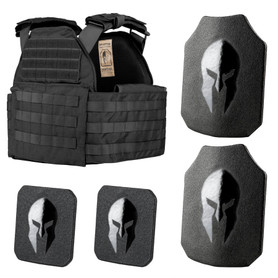 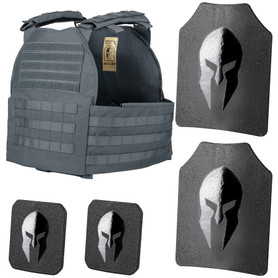 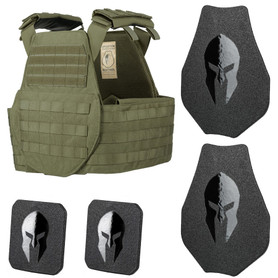 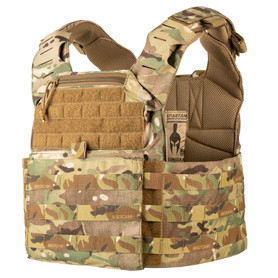 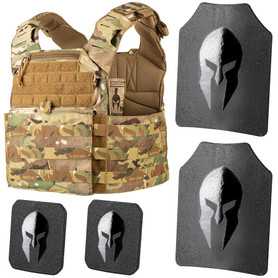