Anyone who’s served in the armed forces in the last half-century knows there’s nothing the military likes more than changing its uniforms. In fact, many seem to exist for nothing more than some design manager’s annual evaluation. The Army’s infamous ACU and the Navy’s widely mocked ‘aquaflage’ are some of the more egregious examples. Luckily, when it comes to personal combat gear, the changes are typically an improvement. When I first deployed to Iraq in early 2007, we were given the IBA (Interceptor Body Armor), which hadn’t really changed from the woodland versions worn in Desert Storm and Bosnia. Additions like neck and nape covers, and shoulder and crotch armor added to the feeling of being a lumbering medieval knight while strolling through the dusty countryside. Halfway through our tour we were issued the IOTV (Improved Outer Tactical Vest), which dramatically helped with weight distribution through a cummerbund waistband. It also added moisture wicking mesh material to the inner fabric, along with an emergency disconnect and myriad other improvements.

A few years later in Afghanistan, the IOTV was swapped yet again for the SPCS (Soldier Plate Carrier System). Though the SPCS sacrificed overall coverage in comparison to the IOTV, it made for a lighter and more mobile vest, which was critical when fighting in mountainous terrain. Despite some ergonomic issues, the SPCS has been widely acclaimed as the best mass-issued individual armor system to date.

Building on the popularity of the military’s latest foray into PPE, Spartan Armor Systems has produced the Achilles Plate Carrier, their take on the SPCS, with significant improvements in both ergonomics and wearer comfort.

We worked with the Spartan Armor team to try out their large Coyote Brown vest with their Hercules level IV ceramic plates. Here’s how it went… 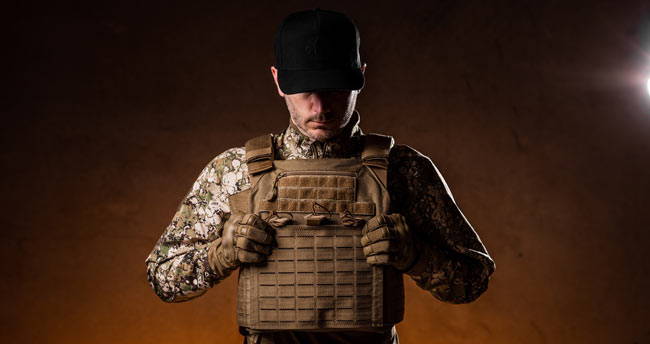 The vest and front-back plate combo weighed in at just under 20lbs, which was a pleasant surprise particularly when compared to similar offerings from 3rd party vendors and the military CIF (Central Issue Facility). Inserting the plates was significantly easier than military versions. The trauma pad and armor nested tightly against easily adjustable straps, allowing for minimal shifting during use. I didn’t receive side plates, but the internal connections for those pouches are of a similar design, so I imagine it would be a similarly snug fit.

The Achilles uses the same cummerbund waistband as the IOTV and SPCS, but the material felt far more durable. By the end of every combat deployment, the waistband of my military PPE was a stretched-out disaster. This one felt like it could go the distance. Once the cummerbund is secure, you close the carrier with the standard front-wrap Velcro waist-belts, and finish with 2 inch quick-release buckles.

To make things even more comfortable, you can completely remove the cummerbund/MOLLE wrap-around belt for a more streamlined and breathable front-back only setup.

The low-profile drag handle has become a standard part of nearly all armor designs, and the Achilles’ does not disappoint. The materials are heavy-duty and at no time did I feel hesitant handling the equipment or carrying it by the handle. I wish the admin pouch was a little deeper, because there wasn’t much I could fit in there. However, that was easily mitigated by attaching my own third-party pouch in front of the mags next to my IFAK (Individual First Aid Kit).

The inner face has a mesh moisture-wicking design, and the shoulder straps are thick and well-padded. This was a huge plus for me, as I would often find my skin rubbed raw during long movements in both combat and training.

How Does It Wear

Regarding loadout, I kept things simple for the review, adding 3 x 5.56 loaded magazines to the removable kangaroo pouch, along with a first aid kit, Camelbak, small admin pouch, and multitool. The entire rig felt compact with minimal shift during wear.

I’ll take Spartan Armor’s word that the plates are indeed Type 4-rated, since I had no desire to test that personally. Instead, I decided to wear the kit for a few hours while going about my weekend honey-do list, mowing the lawn, cleaning up the yard, and fixing a few things in the house.

The mid-summer Georgia heat was the perfect test for the Achilles, and I was pleasantly surprised to find I had no issues with itching, heat-rash, or chafing, which is usually the bane of anyone wearing body-armor for long periods of time. Even with copious amounts of sweat soaking the vest, I had no problems at all. The weight did eventually begin to add some fatigue, but I’ve yet to find a loadout that prevents it completely. When the fatigue did set in, the discomfort was far less than I’ve experienced with other designs.

Satisfied with the Achilles for everyday wear, I decided to give it a more thorough physical test. The next day, I wore the Achilles on a 3-mile run through mixed terrain (hills, trails, sidewalks) around my neighborhood. I experienced zero gear shift; the close fit of the straps allowed me to breathe while keeping everything firmly in place as I moved and changed gait. I threw in a few sets of jumping jacks for good measure, and still there was no unwanted movement.

Since I didn’t want to carry my long gun around the neighborhood (we have a bunch of ‘those’ neighbors), I took the Achilles out to some land owned by a buddy nearby and put in a little trigger time. I run a Bushmaster AR-15 with CQB dot-sight, collapsible stock and three-point sling. I had no issues at all transitioning from the low carry to ready and shooting positions while wearing the plate carrier. Kneeling, standing, and prone were all equally comfortable and I didn’t experience any significant level of equipment shifting during movement between stances.

I don’t wear a leg holster, but I had adjusted the vest high enough to use my standard belt-holster (with a Springfield .45 XD), and sure enough, gun swapping was equally smooth. While shooting with the AR, I had some shoulder slippage from the fat part of the strap padding, but I couldn’t tell if it was just how I’d adjusted it, or an issue with the vest itself. Overall, it didn’t affect my shooting in any meaningful way, so I wasn’t concerned.

I was a big fan of each armor upgrade I received while in the Army. The Spartan Armor Achilles continues that trend. Compared to similar styles, the Achilles is lightweight and incredibly adjustable. In fact, it’s hard to imagine a body size that wouldn’t consider this a great fit. The material is tough, high-quality, and comfortable against your skin.

While I’m glad I don’t have to wear stuff like this for long periods of time anymore, if I had to do it again, the Achilles would be at the top of my packing list. Check out Spartan Armor’s full armor package here.

Article by Task and Purpose

Products Related To This Article