Which Body Armor Provides The Most Blunt Force Trauma Protection?

When it comes to body armor, a lot of time is spent talking about stopping bullets. However, very little time is spent talking about the reality of what happens when you get shot while wearing armor plates. Maybe this is a subject that some body armor companies do not like to talk about because they are worried consumers might be scared away purchasing body armor? At Spartan Armor Systems we feel it’s important for anyone who is looking to buy body armor knows what to expect in the absolute worst-case scenario. Blunt force trauma is a reality of body armor and having a good understanding of it will help you determine which type of body armor is ideal for the scenario you are preparing for. Body armor is not going to do you much good if the impact from a round is enough to immobilize and leave you susceptible to additional damage.

What is Blunt Force Trauma?

As the name suggests, blunt force trauma is damage resulting from the impact of a blunt object. This can apply to anything from a baseball bat to fists. The degree of blunt force trauma can vary widely and is relative to the force absorbed. This means the resulting wound could be anything ranging from light bruising, all the way up to broken bones and internal bleeding. As it relates to body armor, blunt force trauma is caused by the force of the bullet impacting the body armor plate. As shown in the diagram below, the kinetic energy of the bullet dissipates beyond the body armor plate. This means that skin tissue and organs on the other side of the body armor plate are going to absorb this shockwave of energy. However, the size of that shockwave can vary based on the inertia of the bullet and the type of body armor plate being worn. The National Institute of Justice (NIJ) has a maximum measurement of deformation allowed. This measurement is called “Backface Signature”, commonly called backface deformation. The maximum allowed backface deformation measurement is 44mm (1.73 inches). This measurement is taken by placing a block of clay behind a body armor plate and then shooting the armor plate, then measuring the depth of the resulting crater in the clay. If you’re shot while wearing body armor, it’s definitely good that the first bullet has been stopped, but what if there are more bullets on the way? The ability to move away from danger is an important consideration when you are looking to buy body armor. This is where you want to place some careful thought into the type of material your body armor is made of. 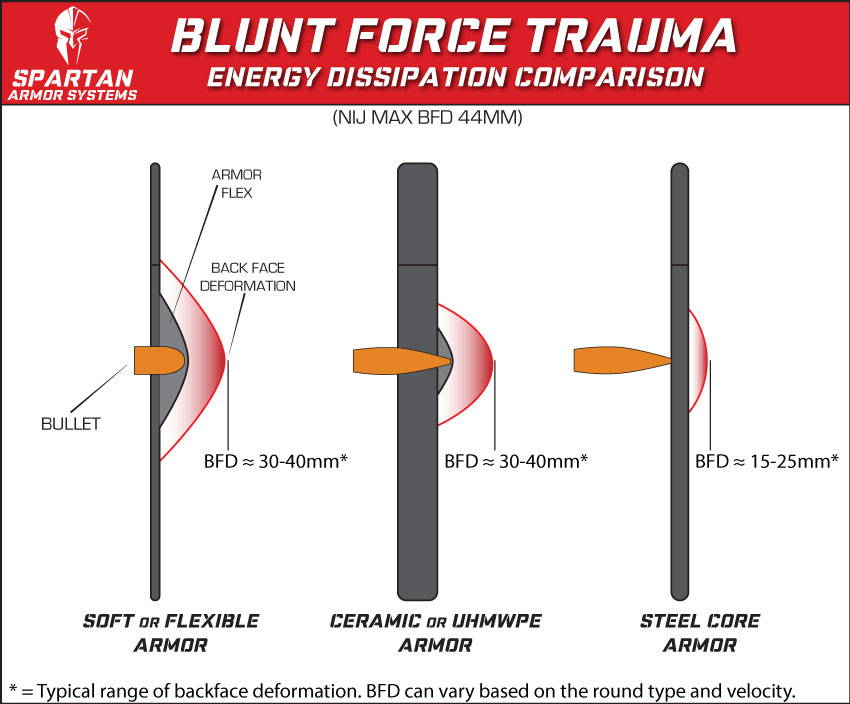 The more rigid a body armor plate is, the less blunt force trauma you can expect. For example, if you shoot a level III steel core body amor plate with a M80 Ball round, you will not see nearly as much backface deformation as you would with a level III UHMWPE body armor plate or even a level IV ceramic plate for that matter. Each material handles ballistic resistance in a different way. Steel core body armor is by far the most rigid, meaning that the armor itself does not deform when shot. However, UHMWPE and Ceramic materials are more malleable so the back of the armor plate will show a large dimple where a bullet has made impact. Keep in mind that the kinetic energy continues to travel beyond that dimple. This dimple effect is not seen with steel core body armor, such as our Spartan™ Omega™ AR500 or Spartan AR550 products. As the illustration above demonstrates, there is no armor flex in steel core armor compared to ceramic, UHMWPE and soft armor. If you’ve seen videos circulating on social media of flexible rifle rated armor lately, it’s important to consider that they do not test those products against 7.62x51 M80 BALL (probably because the resulting backface deformation would be scary). The more flexible armor is, the more secondary injuries you should expect from blunt force trauma. The diagram below depicts injuries related to blunt force trauma. In minor cases you would expect bruising around the area of impact. In more severe cases, you would see severe bruising in a large area with a puncture where the bullet made impact. Broken bones are also a possibility. Keep in mind that the level of injury sustained is directly related to the caliber of round and the type of body armor worn. 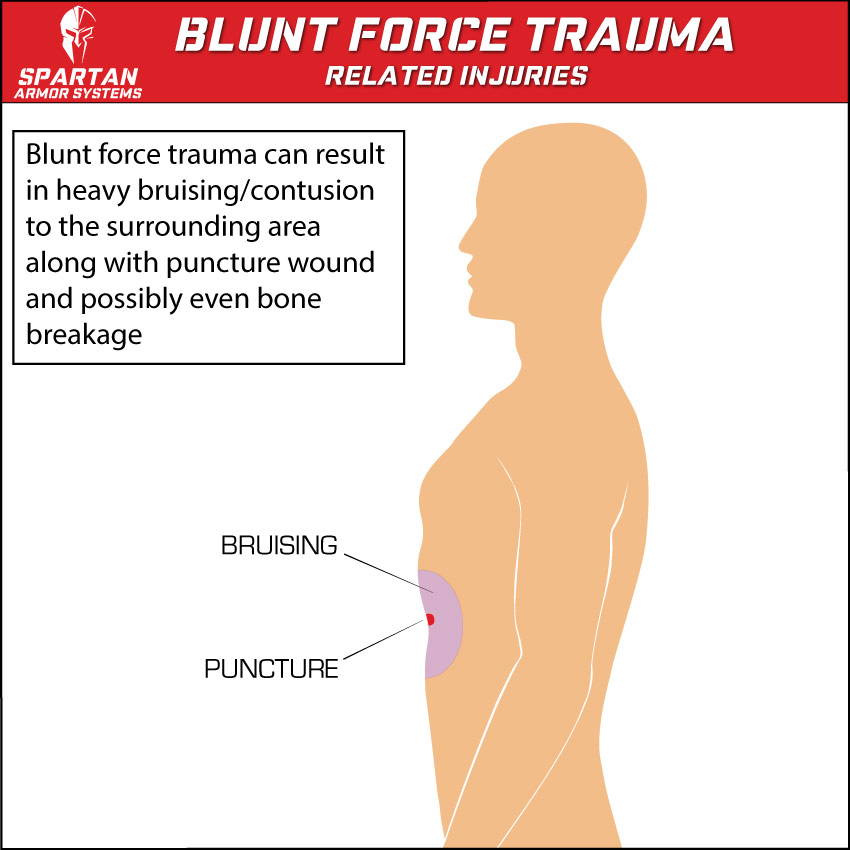 What Can You Do about Blunt Force Trauma?

Whether you decide to buy ceramic body armor or steel core body armor, you do have an option to help limit the effects of blunt force trauma without adding much weight to your plate carrier. We offer Trauma Pads which are made from a special material designed to absorb a fair amount of the kinetic energy that travels beyond the back of the armor plate. Trauma Pads are thin and light weight (well under a pound), but they also make rigid plates much more comfortable to wear due to their cushioning effect. The video below from Military Arms Channel illustrates the significant reduction in backface deformation while using one of our Trauma Pads. 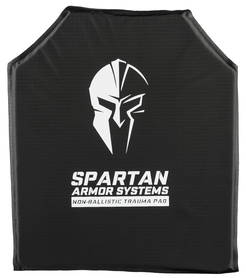 When you’re shopping for body armor, the ability to move quickly away from a life-threatening situation deserves some careful consideration. Materials used for the manufacture of body armor plates can vary widely in their flexibility and malleability. Steel core body armor is the best choice for limiting the effects of blunt force trauma. However, it is important to consider intended application. There are some situations where ceramic/composite body armor may be much more realistic such as when body armor needs to be concealable such as our IIIA Flex Fused Core™. At this point in time, there are no perfect body armor materials on the market so it is important to weigh all these factors before making your purchase. Need help choosing the body armor or tactical gear that is right for you? Don’t hesitate to reach out to us! 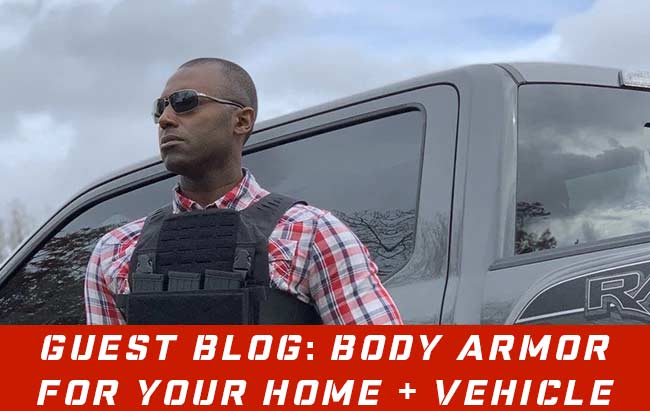 Guest Author: Suresh Madhavan, CEO 221B TacticalTo say the world around us is changing drastically would be the understatement of the century. Between social unrest, pandemics and political uncertainty, more and more people have realized now is the time to take their family's safety and security more seriously. And with movements such as “defund the police” [...] 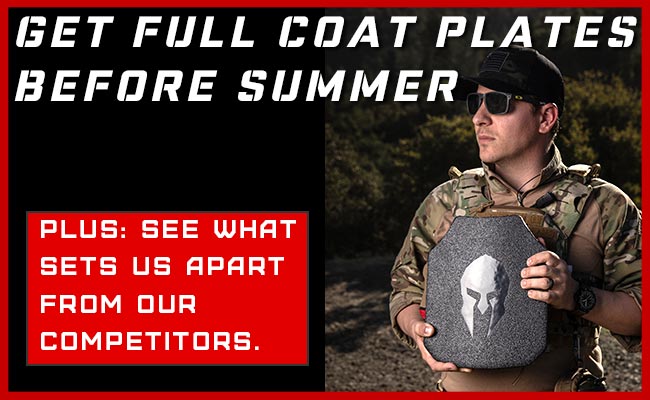 Unbeknownst to most people in the market to buy body armor, the recent storms across the country are having long lasting effects on some raw materials that are important to the manufacturing process of body armor. In particular, there has been a major shortage in various chemical compounds used for full coat steel core body [...] 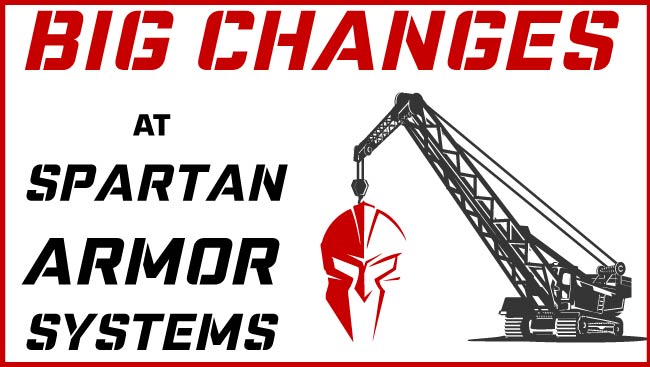 Over the past year we’ve seen record sales and we’d like to thank all of our customers for trusting us with their personal safety. Rather than buying the management team yachts and Ferrari's, we’ve been investing in technology/infrastructure with the aim of reducing production times, increasing R&D and maximizing product quality. Despite the fact that [...] 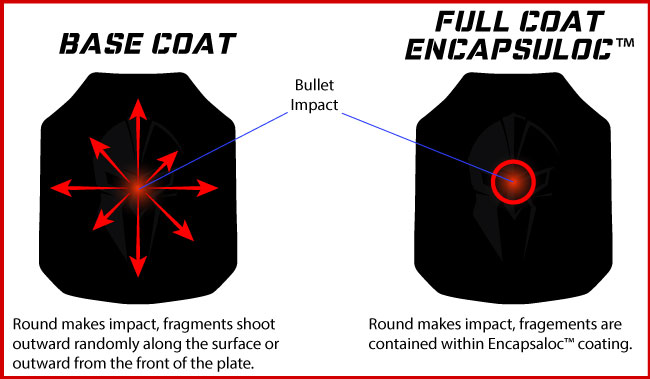 Steel core body armor is a very economical choice when it comes to body armor. Aside from being about half the cost of ceramic armor, AR500 and AR550 steel has excellent ballistic properties. For example, ballistic steel doesn’t suffer from the backface deformation (BFD) you’ll see with ceramic and UHMWPE body armor products. Additionally, steel [...] 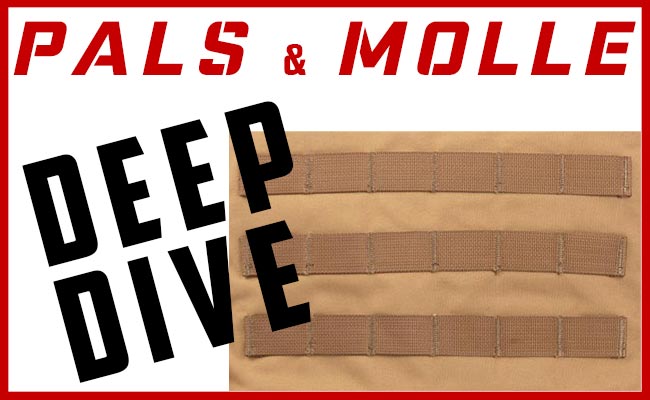 Deep Dive into PALS and MOLLE

If you’re new to the world of plate carriers and body armor, then you’re likely new to PALS and MOLLE. These days, PALS webbing has become the standard means of attaching MOLLE accessories to tactical gear such as plate carriers and backpacks. PALS is an acronym for Pouch Attachment Ladder System. PALS is designed to [...] 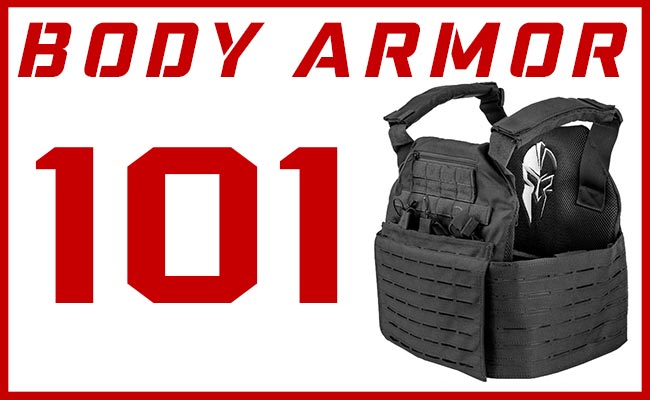 With increases in violence and civil unrest this year, we’ve seen many newcomers to the world of body armor. The purpose of this article is to help bring those you up to speed so that you can make informed decisions when buying body armor. We’ll cover the basics, but also provide some resources to expand [...] 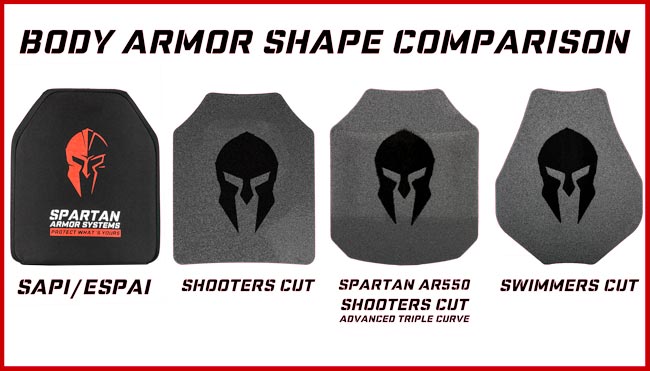 What is SAPI and ESAPI Body Armor?

There's a lot of jargon and acronyms used in the realm of body armor, which can be confusing for people who are new to the topic. In particular, we're frequently asked about the difference between SAPI, ESAPI, shooters cut and swimmers cut body armor. While these body armor types share common ballistic qualities, there are [...] 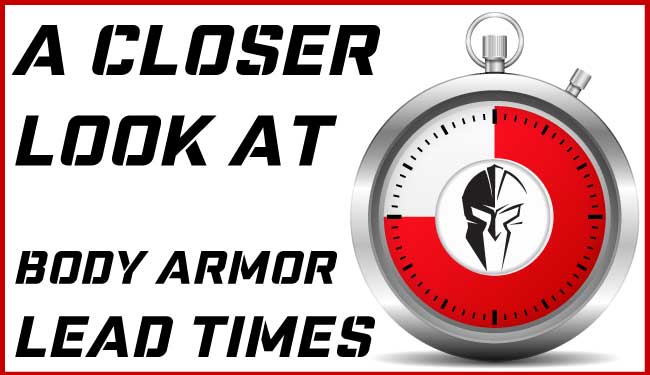 At Spartan Armor Systems we pride ourselves on keeping lower lead times than our competitors. However, when you're living in an Amazon Prime world, it can seem a little surprising that lead times for body armor can be weeks or even months. So why does it take so long to ship some body armor products? [...] 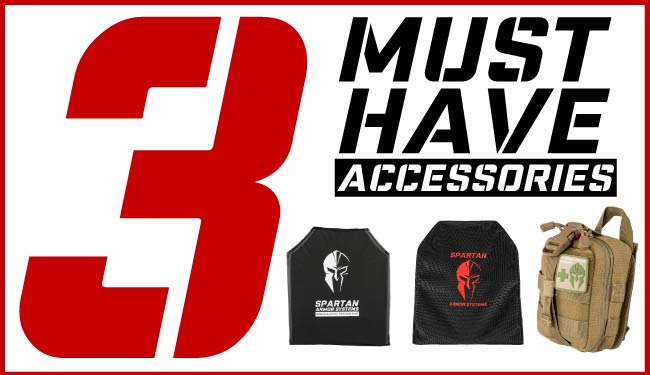 The process of selecting the right body armor and plate carrier is an important first step in increasing your likelihood of surviving dangerous encounter such as active shooter or robbery. However, there are additional safety factors to consider. What if the bad guy isn’t courteous or skilled enough to shoot you square in your body [...]