In this article, we’re going to simplify the protection levels so that anyone can quickly determine the right body armor for their situation based on common ammunition rounds.

Note that there are hundreds of different ammo cartridges on the market so we’re not going to get into the exotic rounds that you’re not likely to ever encounter.

We’re going to focus on ammo cartridges in this article primarily, if you’d like more information on NIJ protection level standards then please see this article. 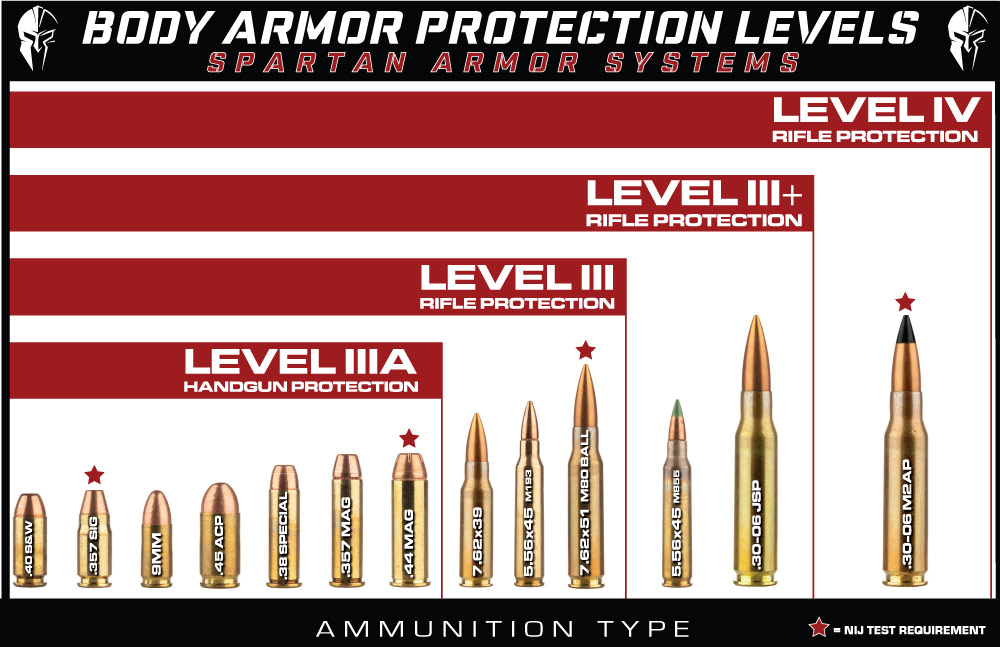 Level IIIA protection is all about protection against handgun rounds. Under NIJ 0101.06 requirements, level IIIA armor is tested against .357 SIG and .44 MAG.

However, level IIIA body armor is capable of stopping most handgun rounds on the market.

Soft armor such as our IIIA Flex Fused Core™ panels and IIIA hard armor such as our Armis Quad Curve plates fall under this category. Whether the armor is hard or soft, the key to remember is that level IIIA indicates handgun protection. It’s important to note that handguns are the predominant firearm used in murders based on FBI crime stats.

High concealable, level IIIA body armor is just a fraction of the weight of rifle-rated body armor. Better yet, our level IIIA soft body armor panels are very affordable which makes them a realistic option for many concerned citizens.

Level III body armor is where the category gets much more specific. Level III can defeat handgun rounds, but is specifically designed to stop larger caliber rifle rounds such as 7.62x51 (M80 BALL also known commonly as .308).

Can level III body armor stop rounds from an AR15 rifle? The answer depends on the round. Our Spartan™ Omega™ AR500 Steel Armor and Elaphros Lightweight level III plates have both been tested against M193 rounds (commonly referred to as .223 or 5.56).

Not all AR15 rounds are the same. The M193 is a “softer” round meaning that it’s more likely to fragment when it hits and makes contact. This makes it easier to stop an M193 round with body armor than a round such as M855 which is designed to penetrate hard materials.

Level III+ is a special designation that the body armor industry created to fill a gap between level III body armor and level IV body armor.

As we mentioned previously, M855 is a “penetrator” round designed to penetrate hard surfaces. This particular round is commonly referred to as a “green tip” based on the green-painted tip of the bullet.

While it’s not the most common threat, armor-piercing bullets are a reality.

Level IV body armor is designed to stop .30-06 M2AP armor-piercing rounds. This is a large caliber round with plenty of powder behind it.

Whether you’re looking for concealable body armor or a full tactical setup, having a good understanding of the body armor protection levels is an important first step.

Once you understand the level of protection that each level affords, it becomes much easier to identify the best body armor for your situation. Remember these basic rules of body armor protection levels:

Have questions or need additional help finding the body armor or tactical gear that’s right for you?