To say the world around us is changing drastically would be the understatement of the century. Between social unrest, pandemics and political uncertainty, more and more people have realized now is the time to take their family's safety and security more seriously. And with movements such as “defund the police” spreading across our nation, more and more people are realizing that their safety and well-being are in their own hands; not anyone else’s.

Over the last year, over 5 million Americans purchased a firearm for the first time in their lives. This was due, in most part, to the violence and unrest seen in many cities across America. The truth is, many of these purchases were made out of pure fear. Fear of someone coming to your door in an attempt to harm you or your family. Fear of an angry mob accosting you as you simply drive to work or home.

In the last year Americans have witnessed violence on the news happening across the country that they’ve never seen before. And frankly, it triggered many to re-consider their safety and security as American citizens.

But owning a firearm is just part of the equation. If an event does occur, having a gun does nothing to protect you against getting shot. This is where body armor comes into play. Based on body armor sales figures for 2020, it appears that millions of people recognized this and acted accordingly.

In 2020, body armor sales skyrocketed due to what was happening across the country. Innocent people living in relatively safe areas were being gunned down. This shook many people to their cores and made them realize they needed protection; protection that owning and/or carrying a firearm does not provide.

So as a civilian, what is the best body armor for protection against what’s going on in the world today? To answer that question, you need to first figure out for what situation you are buying the body armor. Then, you make your decision based on your specific needs and concerns.

The majority of those who purchase a firearm do so for personal protection reasons. And for the most part, this is related to protecting themselves and/or their family while in their homes. In the event an intruder enters their home, they would be able to eliminate the threat before the intruder could cause them or their loved ones harm.

The weapons overwhelmingly used in home invasion robberies are handguns. So it would make sense, for those looking for ballistic protection in their homes, to go with armor designed to protect against handgun threats. Arguably, the most commonly used hand guns in these situations are ones that fire 9mm ammunition.

For protection against 9mm and other handgun threats, you want and need what’s commonly referred to as “soft armor.” This type of armor is flexible (hence “soft”) and very lightweight. You can get soft armor in various size panels to fit inside what’s called a plate carrier, or you can purchase a full soft armor vest. These soft armor vests are what you typically see police officers wearing while on duty; either beneath or over their uniform shirts.

Now, the chances of someone breaking into your home armed with an AR-15 or some sort of other rifle is highly unlikely. However, if this is a concern for you, then you need to step up to hard armor plates.

Hard armor plates are housed in what's called a plate carrier. These carriers hold one plate in the front and one plate in the rear. Plates come in various sizes which you order based on your body type and desired area of coverage/protection. The most commonly used sizes are 8"x10" and 10"x12".

When it comes to home defense, I personally prefer steel plates. Despite being a bit heavier, their multi-hit capabilities give me more peace of mind. Also, I know that within my home, movement will be limited. There will be virtually no running or jumping over objects. Thus the weight of steel body armor plates would not be a concern. Click here to see some of the best, most affordable steel body armor plates on the market.

So if you're looking for basic home defense body armor to protect you against the most common handguns, soft body armor has you covered. Click here for some great and affordable options.

Body Armor To Have In Your Vehicle

As stated, we've seen some scary attacks on people who were innocently driving their vehicles. These attacks have been unprovoked and in some cases have resulted in the victims losing their lives.

Most of the time, staying in your vehicle is your safest bet. However, we've recently seen quite a few scenarios in which occupants were forced to evacuate their vehicles. It goes without saying, if someone is actively trying to flip your vehicle over or light it on fire, it's time to get out and get to cover.

My personal preference for body armor in my vehicle are composite plates. Based on my 13 years as a Law Enforcement Officer and over 20 years of tactical training with Navy SEALs and the likes, I know that if I'm bailing out of my vehicle, I'm more than likely going to be running and moving. And in a situation like that, I want to be as light and nimble as possible.

I may need to run for a few blocks. I many need to climb or go over fences. I may even need to carry one of my children. Thus, saving weight and being as light and nimble as possible are what matters most in situations when I'm not in my home.

Statistically, you are more likely to face rifle (AR-15) threats while out in public than while in your home. Hence why I opt to carry a plate carrier with lightweight composite hard armor plates at all times while in my vehicle. Click here to check out some of the best and lightest composite hard body armor plates on the market.

When considering purchasing body armor, be sure to take into consideration what you may have to do while wearing that armor. Will you need it to be concealed? Will you need to only move around your home or might you have to run from your vehicle and be agile?

Of course one of the biggest factors to consider is what type of threats you're looking to mitigate. For handguns, soft armor can and will do the trick. For rifle threats such as AR-15s, hard armor plates (either steel or composite/ceramic) are a must.

If you have family members that you'd like to have body armor for, you must consider their physical capabilities as well when purchasing body armor for them.

About the author: Suresh Madhavan is Founder and CEO of 221B Tactical (www.221btactical.com). A Pre-Med graduate from university and a 13 year Law Enforcement Veteran, Suresh has spent the last 20+ years training with firearms and tactics with some of the best in the world. From Navy SEALs to Army Rangers and Green Berets, Suresh has traveled across the country and around the world learning from the best of the best. He utilizes his experiences and knowledge to design and develop uncommon tactical gear for the everyday individual.

How to Travel with Body Armor

Body armor is sometimes referred to as being a bulletproof vest, although there is no such thing as wearable protection that’s truly bulletproof. Body armor is, however, bullet resistant and provides wearers with protection against small arms fire, shrapnel, stabbings and similar threats.Dating back centuries, body armor was originally created to provide combatants engaged in armed conflicts with a rudimentary level [...]

Spartan Armor Systems recently added a tough new versatile and technologically advanced plate carrier to its line of top quality tactical gear and body armor systems. Called the Leonidas Plate Carrier, it’s aptly named for the Spartan warrior king who’s best remembered for his heroic stand against the Persian army despite being hopelessly outnumbered at the Battle of Thermopylae in [...]

With so many armor options available nowadays, it’s easy to lose focus on one of the oldest and most effective methods for personal protection: steel armor.Steel armor has been around so long, it’s the one type of protection that’s often taken for granted. From the days of armored medieval knights to present-day law enforcement and military personnel, steel armor [...]

Ceramic vs. Steel Body Armor: Everything You Need to Know

Law enforcement personnel, military combat units or those who are interested in optimal protection during a crisis already know the answer to one question about body armor.Q: Is body armor essential for critical protection during life-or-death situations?A: Absolutely, positively, 100% yes.But there’s another question that many of our customers have, and it’s not so cut and dry. Q: Which type [...]

Is Lightweight Body Armor as Effective as Traditional Armor?

Is Lightweight Armor as Effective as Traditional Body Armor?Body armor systems are worn by law enforcement, members of the military, private security contractors and others whose work places them at risk of being injured or even killed by gunfire. These protective systems consist of bullet-resistant plates inserted into the pockets of tactical vests called plate carriers. The two primary types [...]

Firearms are among the most dangerous threats faced by police officers, corrections officers, DEA agents, border guards, security guards and other law enforcement personnel. Although there’s no such thing as a truly “bulletproof” vest, protective body armor is a critical piece of personal safety equipment for those whose occupations or environments put them at risk. [...]

7 Things You Need to Know About Steel Core Body Armor

High performance steel plate body armor offers a practical alternative to ceramic composite plates for stopping bullets and preventing injury to the wearer. Although both types of armor can stop hits from a rifle, ceramic plates can be expensive, which can sometimes make them an unrealistic choice for cash-strapped law enforcement agencies and preppers on tight budgets.To help you [...] 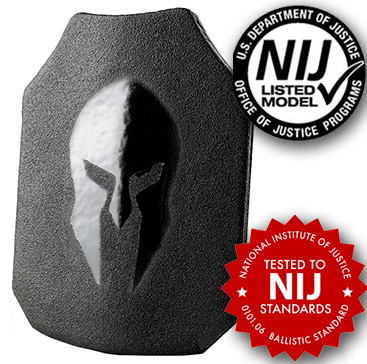 Recently we completed the process to have our AR550 level III+ body armor NIJ certified. We put a lot of work into testing and proving our body armor because there’s no room for substandard products in this industry. Let’s be real folks, we’re not talking about toaster ovens here. If body armor fails then people can die, there are no [...]