Firearms are among the most dangerous threats faced by police officers, corrections officers, DEA agents, border guards, security guards and other law enforcement personnel. Although there’s no such thing as a truly “bulletproof” vest, protective body armor is a critical piece of personal safety equipment for those whose occupations or environments put them at risk. Below, you’ll find everything you need to know about selecting the body armor and plate carrier system that’s right for your situation.

Body armor is uncomfortable and cumbersome, but it’s best to be prepared while on duty, since no one knows what the future holds. According to the National Institute of Justice, ballistic-resistant soft body armor has saved the lives of more than 3,000 police officers over the past thirty years.

Riding in a patrol car, responding to a call or investigating a crime scene and not knowing what the day will bring are all parts of being a law enforcement officer. Danger can come from out of nowhere and can quickly escalate into a matter of life and death. Not all agencies require their people to wear body armor, leaving the choice to the individual officers. As cumbersome and uncomfortable as body armor may be, it’s a valuable piece of personal protective equipment that should always be worn while on duty.

What Will Body Armor Stop? 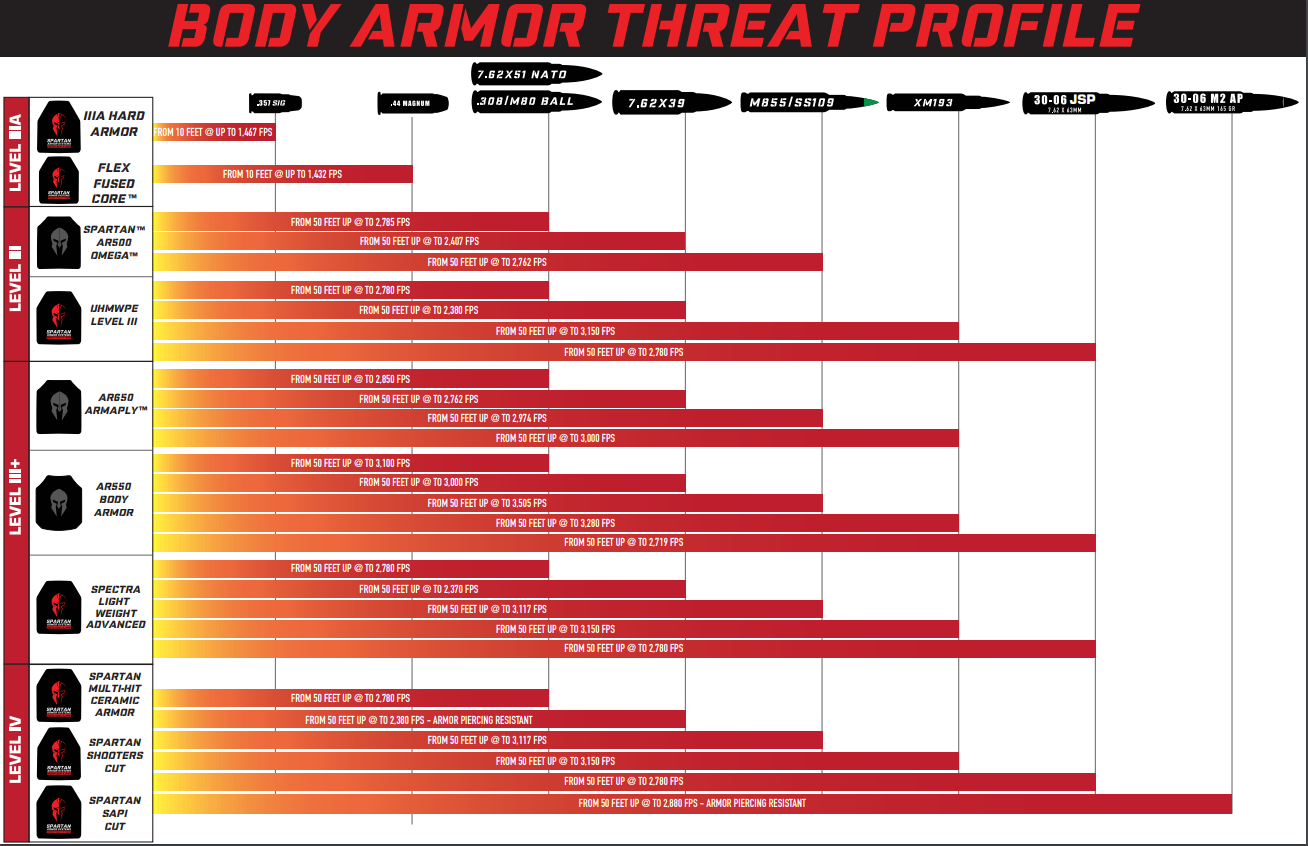 Body armor isn’t bulletproof – it’s bullet resistant. The types of rounds body armor will stop is based upon threat level ratings established by the National Institute of Justice. NIJ body armor ratings range begins at a low of threat level IIIA, which provides minimum protection and is worn mostly by undercover law enforcement personnel who can’t risk being identified. Threat level IIIA will stop most handgun rounds, including .45 ACP, 9mm, .40 S&W and .357 Magnum.

The most common body armor level is NIJ threat level III solid core body armor with ceramic or steel plates that will withstand all handgun rounds, as well as rifle fire in calibers of up to 7.62mm NATO FMJ. The highest NIJ body armor plate level rating is level IV, which will stop rounds of up to 30/06 steel core armor-piercing bullets. Body armor carrying a level III+ rating means that although the plates haven’t been officially rated by NIJ, independent testing has shown that they meet or exceed NIJ standards for threat level IV body armor. Spartan Armor Systems’™ AR650 Armaply™ and AR550 are examples of level III+ body armor.

How Long Will Body Armor Last?

The National Institute of Justice sets a standard of five years’ service for body armor plates, although the plates’ true life depends upon how the plates and plate carrier have been used, maintained and stored. Armor worn every day will wear out much faster than a vest that’s been sitting on a shelf. After a few years, plates should routinely be checked for tears, burns, creases, strange smells and other signs of damage or deterioration. Because ballistic materials degrade over time, soft body armor should always be replaced after five years. Continuing to wear soft body armor longer than five years is at the wearer’s risk.

Both steel and ceramic plate carriers normally come with five-year warranties, although tests indicate steel plates can often be used longer than ceramic composites, which might shatter if dropped or can be damaged by extreme changes in temperature. If properly stored and maintained, steel core body armor can last at least 20 years or more. Regardless of the type, body armor should always be replaced if it’s taken a hit or has otherwise been damaged.

Who Made the Body Armor?

All body armor isn’t the same. Materials and rating methods can vary among manufacturers.  The First place to start is to see if the Armor is NIJ Certified or NIJ Compliant, there is a big difference between the two testing processes. compliant product list

A large number of test samples are sent to a NIJ Certified Lab.  Materials and Construction data is submitted to the NIJ.  For 10 days the plates are heated to 149 Degrees Fahrenheit in 80% Humidity.  After those 10 days the next day the plates go thru heat and cold cycles the coldest is 5 Degrees Farenheit and the highest is 194 degrees Fahrenheit.  If the plates survive that then they move on to a drop test, a water submersion test and then finally the ballistic test.  Once you have cleared those hurdles an initial inspection is scheduled at the manufacturing facility. At the facility they make sure the following  processes are in place: quality control, inventory management systems, and processes to tracking the armor during the entire manufacturing process.

Other than the marking on the plate how can I find out if Body Armor Is Certified? Go to the NIJ Website  and check their NIJ compliant product list.  If the model of armor you are looking at is not on the list it is not certified!

It needs to pass the NIJ ballistic test.  But where was the ballistic test conducted? It could be tested in a backyard, manufactures facility or a NIJ certified lab.  That is the issue with NIJ Compliant.  There is a lot of NIJ compliant armor and for a department or individual on a budget it can be hard to beat.  Our suggestion is to make sure it has been ballistically tested at a NIJ Certified lab and ask for the test report to ensure it will perform to NIJ Specifications.

How do I determine if I need NIJ Certified or NIJ Compliant Armor? NIJ Certified is for the person or department that wants the highest quality and tested product available.  A lot of Body Armor grants require a NIJ Certified Product as well as Fire Departments needing to meet the NFP Standards.  NIJ Certified products can potentially reduce a departments liability if a first responder is injured during duty.  NIJ Compliant armor is great for a department with budget constraints or a individual.  Just make sure that it has been ballistically tested at a NIJ Certified Lab to do this check the NIJ compliant product list to verify that the plates have been certified by NIJ and at a minimum meet threat level III standards before making your purchase.  If the plates are not listed on the NIJ compliant list be sure to ask the manufacturer for the ballistic test reports and make sure those reports come from an NIJ Certified Laboratory.

The Difference Between NIJ Certified and NIJ Compliant Armor

Some unscrupulous manufacturers manipulated the working on their labels to make it appear their body armor was certified by the National Institute of Justice, when in fact it was not.  To counter this deceitful practice, NIJ modified their regulations in 2017, and manufacturers are now required to include the updated NIJ markings on all labels.  Again, we emphasize that you check the NIJ compliant product list before purchasing anything.

Which Type of Ballistic Body Armor Should You Buy? 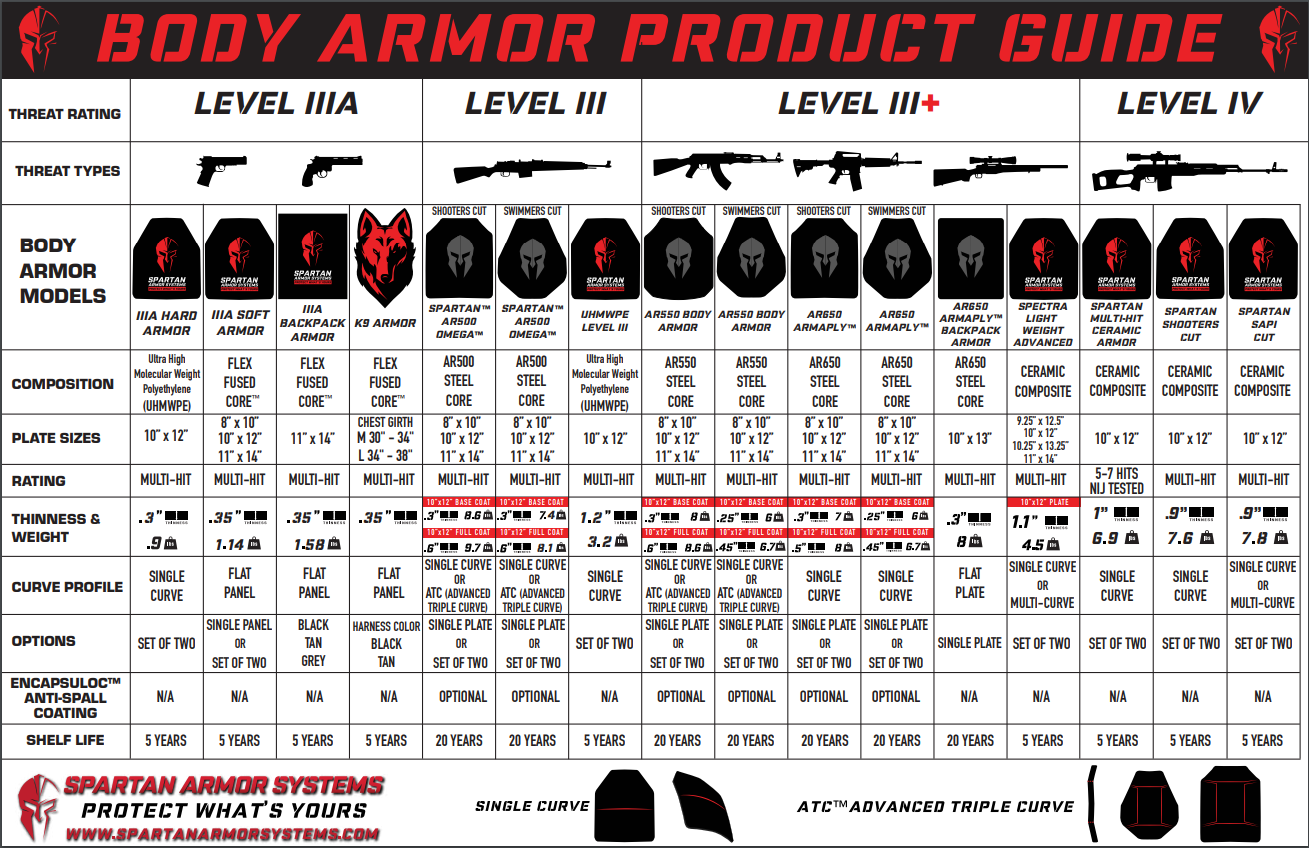 The first step is determining the type of threat you’re most likely to need protection against while on duty, whether it’s handgun, shotgun or rifle fire. There are tradeoffs among the levels of body armor, which are protection, conceal-ability and comfort. The higher the degree of protection, the heavier and less concealable the armor will be. Base your selection upon the lightest body armor available that will protect you against the types of threats you’re most likely to encounter.

NIJ threat level IIIA provides basic protection against handgun rounds of up to 9mm. It’s used primarily by undercover law enforcement because it’s the easiest to conceal. For added protection against many types of small arms fire and shotgun slugs up to 12 gauge, consider level IIIA soft body armor such as the Spartan Armor Systems Flex-Fused Core™ System, which weighs less than two pounds.

If you’re likely to encounter rifle fire, upgrading to NIJ level III, III+ or IV will stop all rounds up to and including .30 caliber M2 armor-piercing ammunition. Although a III+ level isn’t officially recognized by NIJ and is an industry term. Spartan Armor Systems’ AR550 III+ steel core body armor has been independently tested and found to meet or exceed NIJ’s threat level III.  It is NIJ Certified and has had additionally been tested to  DEA Test Protocol and passed.  These three body armor levels are less concealable and heavier than armor with lower threat ratings, but the tradeoff is added protection.

Is it Legal to Buy and Wear Body Armor?

Although there are rumors to the contrary, just about anyone can buy and wear body armor. Purchases are currently legal in all 50 states, with the exception of sales to persons convicted of violent felonies. The only restriction is that body armor can’t be shipped to civilians in Connecticut, where all purchases must be made in person. All other states allow plates and carriers to be ordered online.

How Should Body Armor Fit?

Whether it’s worn outside or under a uniform or other clothing, body armor needs to fit correctly to provide maximum protection and feel reasonably comfortable. There should be enough room for movement, but not be too loose. It shouldn’t be so tight, however, as to overly restrict movement. Body armor that’s too tight can create small gaps between the plates, leaving the wearer exposed to potential threats. Neither should the armor be too long or too short. A vest that’s too short offers too little protective coverage, while a vest that’s too long will interfere with a duty belt or tactical gear. A vest that’s even one inch too long will push against the wearer’s throat when bending down.

Here are other factors to be aware of for a proper fit:

New body armor may be stiff and need breaking in. It’s a good idea to get used to its feel by wearing your armor while off duty until it begins to feel more natural.

Whether it’s for protection against gunfire, sharp edges or spikes, the body armor type and protection level you need depends upon the threats you’re most likely to encounter.

Send us a message or call us at 520-398-3335 for more information on Spartan Armor Systems’ body armor plates and carriers, tactical gear and other quality products.